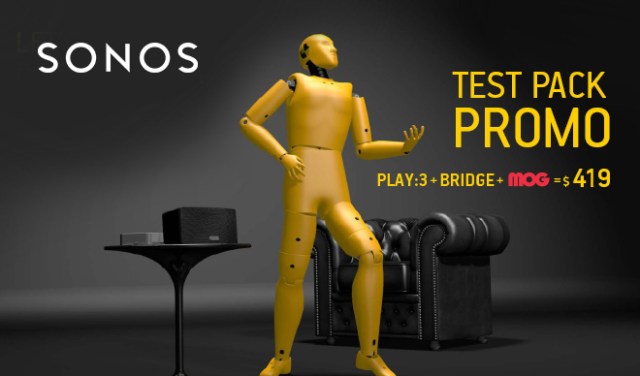 For a limited time, Sonos are releasing a Test Pack aimed to inspire customers to try Sonos at home and never look back.

Each Test Pack includes a PLAY:3, BRIDGE and 60 day MOG music subscription account *; and will retail at normal PLAY:3 price of $419.00
The BRIDGE and MOG will have $0 cost to you with MOG being redeemed online directly by the client.

We’ve all heard people say, I’d be happy to be proven wrong. Or is it just me that says that?

My point is that even though I say that and sometimes I do mean it, mostly I don’t want to be proven wrong.

It just seems that every time Audioquest bring out something new I can’t help but engage my internal cynic.
Yet every time I have to put the cynic in me back in the box finding myself thinking, looks like they’ve done it again.

And that is exactly what the Audioquest DragonTail does.

I used the same hardware I used when I first looked at the Dragonfly with one difference, a cheap one metre USB cable extender.

First up I plugged my headphones directly into my laptop just to remind myself what life is like without a Dragonfly.

When done with that I plugged the Dragonfly into my cheap USB extension cable and I could still hear the Dragonfly at work albeit not quite as good as not using the extension.

Next up it was time to plug the Dragonfly into the DragonTail and the difference was amazing.

So if you lack the room to plug your Dragonfly directly in to your source or just wish to space it away for some breathing room then get the DragonTail.

It’ll be the best $25 you’ve ever spent to improve your sound.

DragonTail is a USB extender for use when a USB device (such as AQ’s DragonFly or a Flash Drive) is too large to fit next to other occupied computer ports. DragonTail’s flexibility also makes it safer to use USB devices on air planes and in other mobile environments.

Many items under stock, these have been sitting about long enough so grab yourself a bargain from our new sales list here.